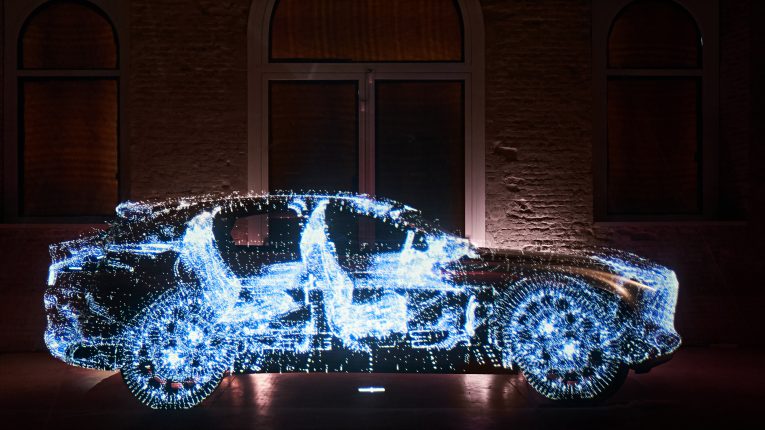 Lexus has just announced that it will join Design Miami/ as the official automotive partner for the 2018 fair. Lexus will deepen its mission to create a better world through design at this global forum that brings together the most influential collectors, designers, curators and critics from around the world in celebration of design culture. On site at the fair, the LF-1 Limitless Future Concept Vehicle will be exhibited in an installation titled The Future is Limitless. This is Lexus’ third year in Miami during Art & Design week, and they will continue their successful Lexus Art Series: Art and Innovation talks with Whitewall.

The LF-1 Limitless will be displayed with a mixed reality installation, an evolution of the projection mapping designed by Japanese architect Socha Ichikawa of dNA (doubleNegatives Architecture/hclab). Ichikawa believes architecture’s potential is restricted by conventional methods of measuring space. By programming computers to interpret space from an omni-directional perspective, he frees his imagination to explore new dimensions.

Combining high performance with unrestrained luxury, the Lexus LF-1 Limitless concept is a showcase of technology, innovation and the latest evolution of design at Lexus. Like molten metal being forged into a fine Japanese sword, the lines of the Lexus LF-1 Limitless concept have the potential to shape the future of a flagship luxury crossover for Lexus. The exhibition is a new iteration of the popular installation shown at Cavallerizze—Museo della Scienza/Tecnologia Leonardo da Vinci in Milan in April 2018.

“We relish the opportunity to position the work of our Lexus designers in the context of this seminal design community,” says Brian Bolain, General Manager of Lexus International. “The LF-1 Limitless represents the apex of Lexus’ future vision and we are proud to bring it to Design Miami/.”

Celebrating its 30th anniversary in 2019, Lexus has seen many milestones since it launched, including the industry-redefining LS 400, the first-ever luxury crossover RX, the first-ever luxury hybrid, and the revered supercar LFA. The LF-1 concept, with its size, proportions and capabilities, represents new thinking applied to the premium luxury crossover space. With The Future is Limitless, Lexus looks to the future.

“Design Miami/ is pleased to welcome Lexus as our official automotive partner and to celebrate the brand’s commitment to creating a better world through design,” says Jennifer Roberts, Chief Executive Officer of Design Miami/. “Lexus’ dedication to design excellence is unparalleled. We are thrilled to have the LF-1 Limitless future concept vehicle on display at Design Miami/ this December.”

Lexus and Whitewall Magazine will team up for the third year in a row and bring their ongoing discussion series to the official programming of Design Miami/. For the first time, the series will take place on site at Design Miami/, as part of the fair’s official programming. The unique series of four conversations features an international group of global art and design leaders discussing key topics relevant to the creative space.

This year’s series will include a panel exploring Supporting Emerging Design For a Better Tomorrow. Lexus International President Yoshihiro Sawa will join the panel to bring the perspective of the Lexus Design Award, with the judges from the 2018 program.

“We are honored to partner with Lexus for the third iteration of the Lexus Art Series: Art and Innovation talks with Whitewall. We are excited, as well, to be holding this year’s panels at the esteemed location of Design Miami/,” said Michael Klug, Whitewall’s Founder, Publisher and Editor at Large.

“This series offers a unique opportunity for us to bring together talents from various industries. We are thrilled to offer a platform for these innovators to share their ideas around new technology and discuss key challenges around designing for the future,” said Laurent Moïsi, Whitewall’s COO and Associate Publisher.

Share
Previous: Should You Buy A Brand New Or Used Car
Next: 2019 Mazda CX-5 Signature Debuts in Seattle