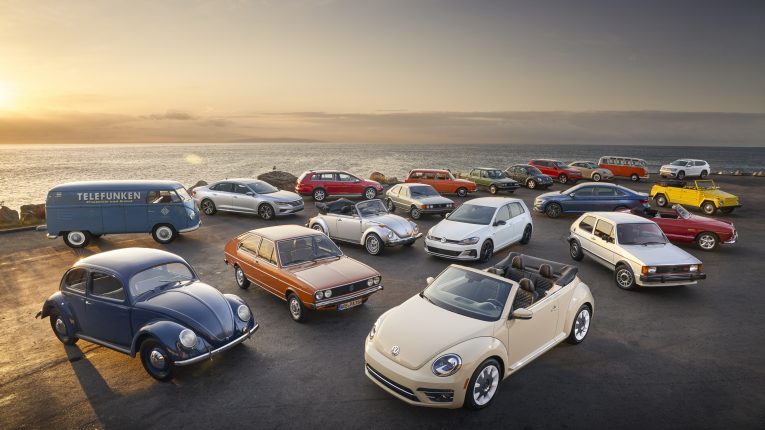 In 1949, Dutch businessman Ben Pon arrived in New York with two Volkswagen Type 1 vehicles—later to be known as the Beetle—in one of the first attempts to sell affordable small vehicles to Americans. More than 17 million vehicles later, Volkswagen celebrates 70 years in America with a drive down memory lane during the LA Auto Show.

From the Beetle and the Bus, through the Rabbit, Jetta and GTI, and to the Tiguan and Atlas, Volkswagen has always maintained its status as “the people’s car”—delivering not just great value in transportation, but fun-to-drive cars with a unique style.

“Over the past 70 years, Volkswagen has grown from two Beetles to a significant part of American history,” said Scott Keogh, President and CEO, Volkswagen of America, Inc. “As we look ahead to driving our company toward bigger goals like our next-generation electric vehicles, we will always remember where we started out.”

While Pon struggled in his mission—it took him two months in America to sell the two cars he brought over—Americans soon warmed to the charms of the Beetle. Volkswagen of America was established in 1955 to organize dealers and provide parts and service, and in 1959, the brand ran its first iconic “Think Small” ads touting the benefits of the air-cooled, easy-to-maintain Beetle.

The Beetle, Bus and more niche models like the Karmann Ghia were essential parts of ‘60s culture, from Woodstock to Hollywood. Volkswagen responded to demand by adding to its model line, with vehicles like the Dasher and Squareback. The ‘70s brought demands for even more efficient models, and the first-generation Scirocco joined the lineup, followed by the Golf with its American name—the Rabbit.

Volkswagen built its first U.S. plant in Westmoreland, Pennsylvania in 1978 and eventually assembled more than 1.1 million Rabbits there. That plant also produced Volkswagen’s first American sporty car, the Rabbit GTI, a model that would win over generations of fans and spawn several hot-hatch competitors.

Throughout the 1980s and ‘90s, Volkswagen offered an increasing level of sophistication and refinement in models like the Jetta and Passat. As retro culture came into vogue in the ‘90s, Volkswagen showed the Concept 1, a reimagination of the classic Beetle. It was so well received that the brand launched the New Beetle in 1998.

With the opening of the Chattanooga plant in 2011, Volkswagen of America began to shift even more production and design of its models to North America. The new 2020 Passat, which goes on sale this month, will join the Atlas and upcoming Atlas Cross Sport as Volkswagen models assembled in America. Chattanooga will also assemble the future of Volkswagen in America when it launches electric vehicle production based on the worldwide MEB platform over the next few years.

The 70th anniversary drive during the LA Auto Show includes the following models and their modern-day counterparts:

By 1949 the Beetle was becoming popular in Europe, thanks to its efficient packaging and easy-to-maintain air-cooled engine. This 25-hp Beetle is nearly identical to the ones Ben Pon first imported to the United States in 1949.

Painted in the logo of Telefunken, a German radio company, the early Panel Delivery version of the Bus demonstrated its versatility for hauling cargo as well as people. It used a modified version of the Beetle’s floorpan and the same 30-hp flat-four engine.

Built by German coachbuilder Karmann, the Karmann Ghia injected a mix of sporty style into the Volkswagen lineup while using the same components as a regular Beetle—including its 34-hp engine for 1963.

The rarest and most expensive variant of the classic Bus was the 21-Window “Samba” version, which has now become a sought-after collector’s item. The Volkswagen-owned copy in two-tone white-on-orange paint makes all of 53 hp.

Originally designed as a military vehicle for European nations, the Type 181 was an off-road friendly model. With unique looks and 46 hp, Volkswagen gave it a name as unique as itself for the American market—“Thing.”

The Squareback wagons were an attempt at a smaller car that could still haul a family, complete with storage under the hood and above the engine in back. The 65-hp version was among the first vehicles to have fuel injection.

Aimed at a more premium market than the Beetle, the Dasher (known as the Passat in Europe) came in sedan, hatchback and wagon variants, powered by a water-cooled four-cylinder engine with 78 hp driving the front wheels.

A farewell to the Beetle era, the 1979 Super Beetle convertible was the last of the original generation to be sold in America. The example owned by Volkswagen has covered fewer than 1000 miles since new with its 48-hp engine.

The successor to the Ghia, the Scirocco was a Giugiaro-designed coupe that brought a different style to the Volkswagen line. Volkswagen of America’s 74-hp model has fewer than 1,000 miles on the odometer.

Offered as the sedan alternative to the Golf/Rabbit, the first-generation Jetta mixed European design and engineering with fuel-efficient packaging. A 76-hp four-cylinder engine was linked to either a five-speed manual or three-speed automatic transmission.

With 90 hp and a five-speed manual, the Rabbit GTI created the “hot hatch” segment and offered affordable performance with everyday usability, just as its descendants do today.

The official return of the Beetle in a new design for the 20th century was a global event, based on the groundbreaking Concept 1. Responding to public demand, Volkswagen kept many of the concept’s flourishes in the 1998 debut of the New Beetle, such as the dash-mounted bud vase.

More 454 posts in News category
Recommended for you

At the Apple Worldwide Developer Conference, Apple announced that BMW will become the first automaker…