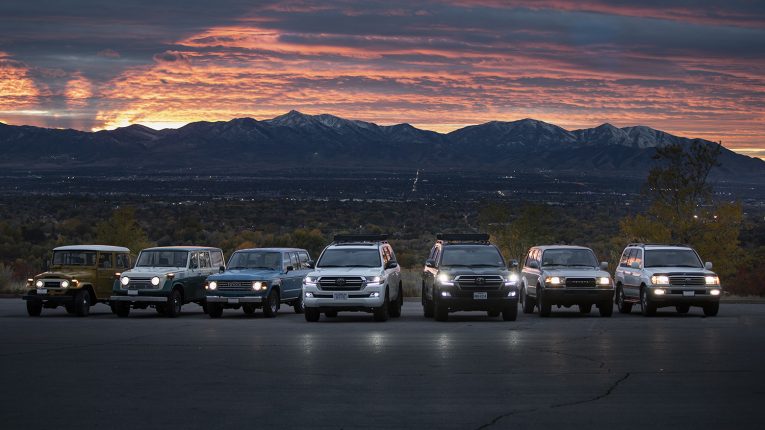 Can a vehicle really be in a class of one? In America in 1958, the Toyota Land Cruiser was. That’s because Toyota sold just a single Land Cruiser in the United States in its first year here. Just one. But then, legends sometimes get off to a slow start.

That legend had global impact, as reflected in Toyota selling its 10 millionth Land Cruiser in summer 2019 in Australia, Land Cruiser’s largest market. (The total includes some Land Cruiser models that were not imported to the U.S.)

As one of today’s most luxurious full-capability SUVs, the 2020 Land Cruiser might seem to have little in common with the bare-bones Land Cruiser models built through the late 1970s. Yet, Land Cruisers new and classic are connected through the decades by world-renowned capability, an adventurous streak, and the shared Toyota core values of quality, dependability and reliability.

Land Cruiser heritage stretches back to 1950 and a vehicle originally developed for military use. Japan’s National Police Reserve Forces had called for a rugged, locally built all-terrain four-wheel drive vehicle, and Toyota demonstrated a highly capable little truck known as the Toyota BJ. Its 3.4-liter inline six-cylinder engine made 75 horsepower with plenty of low-speed torque, just what such a vehicle needed.

The Toyota BJ proved its mettle in July 1951, when Toyota test driver Ichiro Taira drove one up the trail on Japan’s 12,388-foot-high Mt. Fuji, making it to the sixth checkpoint (there were, and still are, 10 checkpoints). That was further up the mountain than any motor vehicle had ever gone before. Although the National Police Reserve Forces passed on Toyota’s plucky BJ, Japan’s National Police Agency ordered a fleet, as did government forestry and utility agencies.

In 1954, Toyota gave the BJ a new name: Land Cruiser was suggested by Toyota Director of Technology Hanji Umehara, who observed that the vehicle seemed to easily cruise over the roughest terrain.

For 1955, Toyota introduced the Land Cruiser 20 Series, now with a more powerful 3.9-liter inline-six. It was still a Spartan machine, but with some suspension changes to improve the ride. Toyota’s all-terrain workhorse found early markets in South America and the Middle East, and an upgraded model in 1955 had doors and a metal top.

Toyota added more body styles for the 20 Series, including a pickup truck, station wagon, and a cab/chassis fire truck version. The Land Cruiser became the basis of Toyota’s export strategy, using the vehicle to establish a reputation of toughness.

On October 31, 1957, Toyota Motor Sales, U.S.A., Inc. opened in a former Rambler dealership in Hollywood, California. Vehicle sales began in 1958, with the aforementioned single Land Cruiser, along with 287 Toyopet Crown sedans. It was a start.

The Land Cruiser 20 Series continued for a few more years before a major change came in 1960. The 40 Series, a.k.a FJ40, looked evolutionary, but there was more to it than met the eye. The chassis with solid front and rear axles on leaf springs continued, as did the fold-down windshield. But angular styling, a flat, white roof, wraparound rear windows and short overhangs established a new look, soon to become iconic. Improved assembly processes raised quality and finish.

The inline-six produced 125 horsepower and 200 lb-ft of torque, more than other utility vehicles offered at the time. The FJ40 was the first Land Cruiser with a two-speed transfer case, which improved off-road capability and greatly contributed to the Land Cruiser legend. (The 20 Series had relied on a super-low 5.53:1 first-gear ratio for handling steep inclines.)

The FJ40 came to the U.S. in 1960 and was Toyota’s best-selling vehicle here through 1965, when the Corona passenger car arrived and took over that mantle.

By the mid-1960s, many customers were seeking larger 4-wheel drive vehicles, for businesses such as ranching and surveying, as well as for sportsman and family outdoors activities. Toyota responded with the Land Cruiser 55 Series wagon model in 1967, built on a 16-inch longer wheelbase and featuring its own, modern styling and an improved version of the 3.9-liter inline-six. Toyota became the third-best-selling import brand in the United States that year.

As global demand for these mountain goats on wheels steadily increased, Toyota expanded Land Cruiser production to additional countries. Toyota built its 100,000th Land Cruiser model in 1968, and the 300,000th in 1973.

While Land Cruisers were not high-volume vehicles, an intensely loyal global following had made them icons of Toyota’s global family. There was no doubt that the Land Cruiser’s reputation for durability had positively impacted the Toyota passenger car line in all markets. This minimalist, trail-conquering machine had become a sort of brand halo vehicle.

Both the 40-series and 55-series Land Cruisers gained a new 4.2-liter inline-six in 1975, and a 4-speed transmission replaced the 3-speed. In 1979, the FJ40 retailed for about $6,000 in the U.S., and, with neither air conditioning nor power steering, was still a back-to-basics SUV. By then, however, it was clear that another evolutionary step was needed.

One Era Ends, Another Begins

For 1980, Toyota replaced the Land Cruiser 55 Series with the all-new 60 Series (FJ60), which offered greater comfort while still retaining the rugged capability. The one millionth Land Cruiser was built that year.

Toyota ended FJ40 sales in the U.S. in 1983 and stopped building the landmark vehicle the following year. (A new model, the Land Cruiser 70 Series, replaced the FJ40 in many markets, though not in the U.S.) In 2007, Toyota introduced the FJ Cruiser, a rugged though comfortable SUV inspired by the FJ40’s design and built using some components from a Land Cruiser model called the Prado (J120). The FJ40, meanwhile, has today become a collectible vehicle, with some selling at major auctions for $50,000+.

The Land Cruiser 60 Series evolved slowly through the 1980s, a decade that would see significant growth in the SUV market. The 1988 Land Cruiser was updated with a new dash and upgraded interior, and a new 155-horsepower 3F 4.0-liter engine replaced the old 4.2 liter. Rectangular headlamps immediately identify the 1988 model.

More evolution was needed, especially in the U.S. market, where the SUV market was rapidly expanding. Introduced in spring 1990 as a 1991 model, the Land Cruiser 80 Series represented a major leap forward for the vehicle. Coil springs for the front suspension improved ride quality, and for the first time in a Land Cruiser, a full-time 4-wheel drive system could be used in all conditions, including dry roads. A locking center differential ensured off-road capability, something many Land Cruiser owners used.

By 1991, leather-trim seats, air conditioning, upgraded audio and other amenities were pushing the Land Cruiser into luxury territory. Safety evolved, too, with airbags and ABS braking. For 1993, Toyota endowed the Land Cruiser with an all-new, 24-valve, DOHC 4.5-liter inline-six engine producing 212 horsepower and 275 pound-feet of torque, the added power making the Land Cruiser an even better tow vehicle than before.

Toyota Land Cruiser 100 Series: Power and Luxury on the Rise

Land Cruiser evolved more quickly in the 1990s, becoming a versatile, rugged and comfortable everyday family vehicle for many customers. Then came a major leap: The Land Cruiser 100 Series introduced for 1998 was sleeker, but still with a shape defined by function. The new chassis was 50 percent stiffer, and the ride was more comfortable thanks to Land Cruiser’s first independent front suspension. For the first time, the Land Cruiser’s engine was not an inline six, but rather a 4.7-liter V8 with 230-horsepower. For 2006, output increased to 275 hp.

As plush as the Land Cruiser had become, it was as capable as ever, with steep approach and departure angles for trail driving, along with automatic height adjustment suspension. The V8 delivered 80 percent of its peak torque at just 1,100 rpm, burnishing Land Cruiser’s towing performance and off-road chops. This was a vehicle that could conquer the trail while coddling its passengers. The more luxurious Lexus version was the LX 470.

The somewhat smaller Land Cruiser Prado (J120), meanwhile, became the basis for the Lexus GX 470 SUV in 2003, and the basic chassis also underpinned the fourth generation Toyota 4Runner. This 120 Series evolved into the 150 Series, achieving its best-equipped and most luxurious form as the Lexus GX 460 with a 301-hp 4.6-liter V8.

If the 100 Series Land Cruiser had been blazing a trail to premium luxury, the 200 Series certainly reached that destination when introduced in 2008. The current-generation Land Cruiser created a benchmark for combining no-compromise capability with premium luxury.

Beneath the polished, elegant exterior, the Land Cruiser is all business, with skid plates to help protect the front suspension, radiator, fuel tank, and transfer case. With its standard Trailer Towing Package, the Land Cruiser can pull a trailer up to 8,100 pounds.

Roughing It Doesn’t Have to be Rough

No matter how difficult the road or trail gets, the 2020 Toyota Land Cruiser indulges its occupants in comfort. Among the premium luxury features are leather-trimmed seating for up to eight, ventilated front seats, heated steering wheel with power tilt and telescoping and memory, power moonroof, four-zone automatic climate control with 28 cabin air vents, a refrigerated compartment inside the center console, and much more.

In 2018, Toyota sold 318,000 Land Cruiser models worldwide (all versions included), with Australia the largest market. The U.S. takes a few thousand per year, and while that’s a huge leap over the single Land Cruiser sold here in 1958, Toyota’s flagship SUV remains a proud cornerstone on which the brand’s success was built.

Share
Previous: 2020 Buick Encore GX Unveiled
Next: VW Celebrates 70 Years in the US