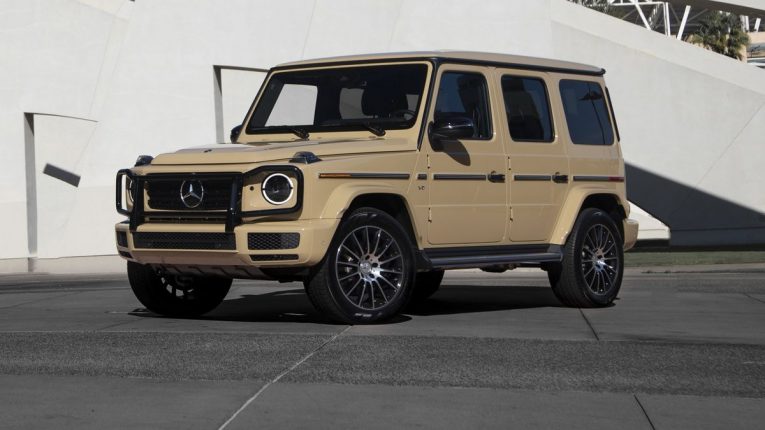 The G-Wagon, the luxury off-road vehicle from Mercedes-Benz, has long been considered a design icon. Its external appearance has not changed significantly since 1979. Iconic elements continue to serve very specific purposes, now as then, and to give the G-Class its unique appearance. These features are still found in the new G-Class: the distinctive door handle and the characteristic closing sound, the robust exterior protective strip, the exposed spare wheel on the rear door and the prominent indicator lights. Special features like these in conjunction with the off- roader’s angular lines define its special distinctive look.

The primary goal of development was to redefine the quality of handling both on and off the road. This goal has been achieved: the new G-Class performs even better off-road, while on the road it is significantly more agile, dynamic and comfortable than its predecessor. Thanks to its standard ladder-type frame, the three 100-percent differential locks and LOW RANGE off-road gear reduction, the G remains a true G.

The components of the double-wishbone front axle are directly mounted to the ladder-type frame without a subframe. The lower wishbone’s attachment points on the frame in Z-axis are positioned as high up as possible. This arrangement ensures good drivability beyond the asphalt. Specifically for the G-Class, the new front axle is designed in such a robust way that the off-road performance and off-road capabilities of its predecessor are improved.

Equipped in this way and with a ground clearance of 10.6-in to the front axle gear, the G-Class provides plenty of potential for maximum assertiveness and driving pleasure in harsh terrain. The figures speak for themselves (below figures vs. previous gen):

Every G-wagen features a large 12.3-inch infotainment display that is primarily controlled through a rotary knob and touchpad mounted on the center console. Along with useful steering-wheel controls and voice commands, the system is easy to operate and less distracting than touch-heavy alternatives. It also comes standard with Apple CarPlay and Android Auto, as well as a 15-speaker, 590-watt Burmester audio system. Those looking for further upgrades can add a Wi-Fi hotspot or a rear-seat entertainment system.

Share
Previous: What are the Most Often Replaced Truck Parts?
Next: 5 ways to secure your dog in the car