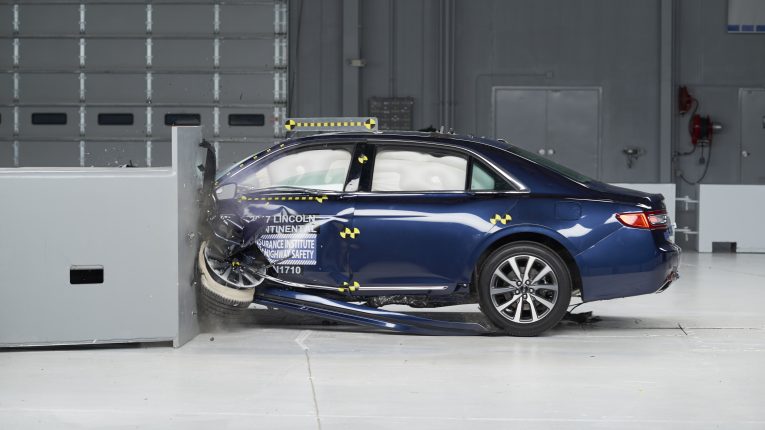 The Lincoln Continental, the Mercedes-Benz E-Class and the Toyota Avalon come out at the top of a group of six large cars recently evaluated by the Insurance Institute for Highway Safety.

The three cars qualify for TOP SAFETY PICK+, the Institute’s highest award. The Tesla Model S, the Chevrolet Impala and the Ford Taurus fall short of any award because they each earn only an acceptable rating in the small overlap front test.

“This group of large cars includes some with stellar ratings, but our small overlap front test remains a hurdle for some vehicles,” says David Zuby, IIHS executive vice president and chief research officer.

The 2017 Continental is an all-new vehicle with a revived model name. It replaces the Lincoln MKS. The Continental’s optional front crash prevention system earns a superior rating. When equipped with the system, the car avoided collisions in IIHS track tests at 12 mph and 25 mph. The system also has a forward collision warning component that meets National Highway Traffic Safety Administration (NHTSA) criteria.

The Continental’s LED projector headlights, an option on the Reserve trim line, earn a good rating, providing ample lighting on a straightaway and most kinds of curves. They can be obtained with high-beam assist, a feature that automatically switches between high beams and low beams, depending on the presence of other vehicles. However, the vehicle is also available with high-intensity discharge (HID) lights that earn a poor rating.

The E-Class was completely redesigned for 2017. It has two different front crash prevention systems, one standard and the other optional. Both earn superior ratings, avoiding collisions in the track tests at both speeds and earning credit for forward collision warning that meets NHTSA criteria.

The E-Class is available with two different headlight systems. One earns a good rating, while the other is acceptable. The good-rated headlights, which come on the E-300 trim when equipped with the Premium II or Premium III package, earn the highest score of any headlights IIHS has rated. The low beams provide enough light on the straightaway and all curves, though they create a bit of glare for oncoming drivers. The high beams provide fair visibility on the left side of the straightaway but good visibility everywhere else. The good-rated headlights also come with high-beam assist.

The Avalon also joins the ranks of the TOP SAFETY PICK+ winners. The car was previously recognized as a TOP SAFETY PICK winner. It fell short of the highest award because it had only marginal and poor headlights available. Toyota improved the aim of the headlights on Avalons built after March. As a result, the Limited and Hybrid Limited trim lines now come with acceptable-rated headlights. Other trims have marginal headlights, but none are poor anymore.

Toyota wasn’t the only company to try to boost its car’s standing with midyear improvements. The Tesla Model S initially had earned an acceptable rating in the small overlap test, which represents the type of crash that occurs when the front driver-side corner of a vehicle hits a tree or utility pole or collides with another vehicle. The main problem with the performance of the Model S was that the safety belt let the dummy’s torso move too far forward, allowing the dummy’s head to strike the steering wheel hard through the airbag.
Tesla made changes to the safety belt in vehicles built after January with the intent of reducing the dummy’s forward movement. However, when IIHS tested the modified Model S, the same problem occurred, and the rating didn’t change.

The second test also uncovered another potential problem: Despite having an identical structure, there was considerably more intrusion than in the original test because the left front wheel movement was not consistent. Maximum intrusion was 7 times greater in the lower part and 3 times greater in the upper part of the driver’s space. The two tests’ structural ratings were combined, resulting in acceptable structure and an acceptable rating overall.

The greater deformation in the second test also resulted in damage to the left front corner of the battery case, but the deformation was limited to an area that didn’t contain battery cells. Higher-performance variants of the Model S, the 90 and 100, have larger batteries. They aren’t covered by this rating and haven’t been tested separately.
The Model S is only available with poor headlights and hasn’t been rated yet for front crash prevention. While automatic braking comes standard, the software for the feature was only recently activated.

In the small overlap crash, the Impala’s structure held up reasonably well, with maximum intrusion of 4 inches at the lower door-hinge pillar. The dummy’s head hit the front airbag, but then slid off the left side, leaving the head partially unprotected. Measures taken from the dummy indicated a low risk of any significant injuries.

The Impala’s optional front crash prevention system earns a superior rating. It avoided a crash in the 12 mph test, while its impact speed was reduced by an average of 10 mph in the 25 mph test. The system meets the NHTSA criteria for forward collision warning.

All the available headlights on the Impala earn a poor rating.

The Taurus is another vehicle that hadn’t been tested previously for small overlap protection. Maximum intrusion reached 5 inches at the lower door-hinge pillar. In contrast to the Impala’s test, the dummy’s movement in the Taurus was well-controlled. However, measures from the dummy indicate that injuries to the left lower leg would be possible in a crash of this severity. The Taurus earns good ratings in the other crashworthiness tests.

For front crash prevention, the Taurus has a basic rating. It has forward collision warning that meets NHTSA criteria but lacks automatic braking. All the available headlights for the Taurus are rated poor.