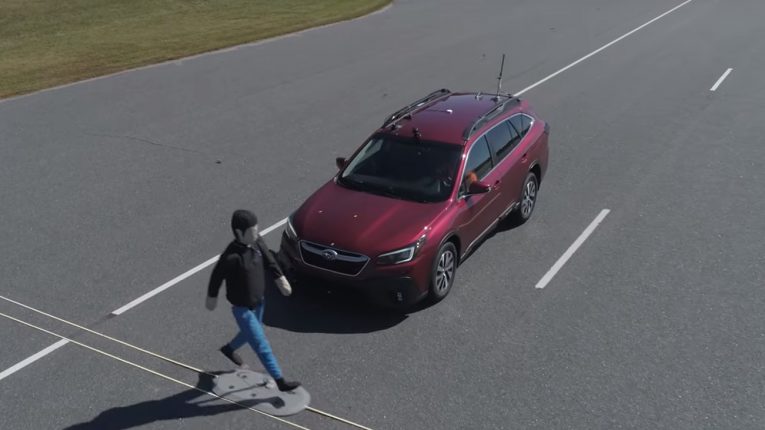 The Insurance Institute for Highway Safety rated the pedestrian crash prevention systems of 16 midsize cars in the lead-up to Halloween, a holiday that consistently ranks among the deadliest days for pedestrians in the United States.

Four luxury and two nonluxury midsize cars earn a superior rating for their pedestrian crash prevention systems, while four nonluxury cars earn only a basic rating or no credit. Another six cars earn an advanced rating.

Annual pedestrian fatalities have increased 53 percent since reaching a low point in 2009 (see “Study highlights rising pedestrian deaths, points toward solutions,” May 8, 2018). More than 6,000 pedestrians were killed in 2018. During 2013-17, the two deadliest days of the year for pedestrians on average were Oct. 31 and Nov. 1 (or after midnight on Halloween).

Technology could be part of the solution. Many manufacturers are upgrading the automatic emergency braking systems they have agreed to install by 2022 to recognize pedestrians, in addition to other vehicles. These systems scan the path ahead and automatically apply the brakes to avoid hitting people in the roadway.

About two-thirds of the vehicles that IIHS rates included pedestrian detection in 2019, in many cases as standard equipment. Among the vehicles evaluated in this current round of testing, pedestrian crash prevention is standard on all six luxury cars and six out of 10 nonluxury cars.

When they work correctly, such systems can help avert tragedy. A 2017 Highway Loss Data Institute analysis, for instance, found that Subaru’s EyeSight system with pedestrian detection cut the rate of likely pedestrian-related insurance claims by 35 percent, compared with the same vehicles without the system (see “Subaru crash avoidance system cuts pedestrian crashes,” May 8, 2018).

“Pedestrians are the most vulnerable road users, so it’s encouraging that pedestrian crash prevention systems are standard equipment in 12 out of the 16 midsize cars we tested, including five out of six superior-rated systems,” says IIHS President David Harkey.

Most pedestrian crash prevention systems use one or two forward-facing cameras mounted near the rearview mirror and/or radar sensors in the front grille to scan the roadway for pedestrians poised to enter the vehicle’s path. Algorithms determine if the detected objects are pedestrians. In some cases, they can recognize bicyclists or animals too. If the software calculates that a collision is imminent, it alerts the driver and applies the brakes faster than a human can react.

The performance of the systems varies widely, the latest IIHS ratings show.

“Car makers often roll out these kinds of advanced systems in more expensive luxury lines or as expensive options, so the superior performance of the standard systems on the more mainstream Maxima and Outback is noteworthy,” Harkey says.

At the other end of the spectrum, the Ford Fusion, Hyundai Sonata and Kia Optima earn no credit because they failed to slow significantly in multiple scenarios.

IIHS launched its pedestrian ratings in February. In the first round of testing, four out of 11 small SUVs earned a superior rating, while another five earned an advanced rating (see “New ratings address pedestrian crashes,” Feb. 21, 2019).

IIHS tests performance in three scenarios: an adult pedestrian stepping into the street in the path of the oncoming vehicle with an unobstructed view, a child darting into the street from behind two parked cars, and an adult pedestrian near the side of the road in the travel lane, facing away from traffic. The two perpendicular tests are conducted at 12 and 25 miles per hour, and the test simulating a pedestrian walking in a parallel path to the vehicle is conducted at 25 and 37 mph.

In each of these tests, the system has 1 or 2 seconds to stop the car to avoid hitting the pedestrian dummy.

Each test is performed in full daylight on dry pavement. Systems might not perform as well during the nighttime hours that account for most pedestrian fatalities, though if paired with good-performing headlights, they should be able to detect pedestrians.

To determine the ratings, points are tallied based on the average speed reduction the vehicle achieves in five repeated test runs. The vehicle’s performance in the four tests in which the dummy crosses or darts out into the road perpendicularly account for 70 percent of the score.

Systems that earn a basic rating failed to slow the vehicle significantly in one or more of the tests, while those that earn no credit failed in multiple scenarios. The Ford Fusion, for instance, which receives no credit, did not slow at all in the tests simulating a child darting across the road and only slowed slightly in the scenarios approximating an adult stepping into the street.

“The child dashing out from behind parked cars is a very challenging test,” says Harkey. “But it’s fitting that it was one of the main things that separated the top systems from the rest of the pack, since that is certainly a frightening scenario on Halloween or any day.”

Share
Previous: Staying Safe on The Roads Over The Colder Months
Next: 2020 VW Atlas Cross Sport