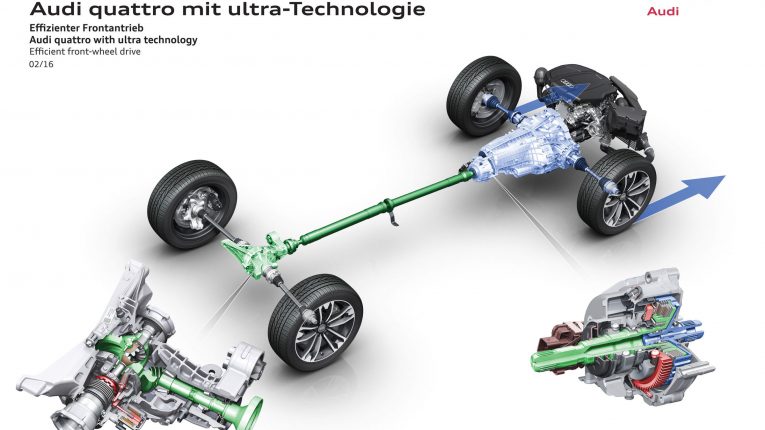 Audi quattro all-wheel-drive technology is known for providing maximum grip on any road surface during dry or inclement weather.

The quattro all-wheel-drive system defines Audi in many ways and remains its unfair advantage on the road and racetrack. In motorsports, quattro propelled Audi to numerous World Rally Championships in the 1980s. It catapulted Audi’s success in IMSA and Trans-Am racing in the ‘80s and 1990s. And, it was a driving force behind the R18 e-tron quattro’s success at the 24 Hours of Le Mans.

The idea of quattro stemmed from the desire to mass-produce cars with traction to all four wheels, with Audi engineers first developing a lightweight all-wheel-drive system based on the fundamental traits demonstrated by the Volkswagen Iltis off-roader in the 1970s. The technology was then brought under the Audi banner in 1980 with the first production quattro all-wheel-drive systems. Today’s quattro all-wheel drive builds on the 40 years of learnings since entering production, with several different types available in various applications. Before getting to today’s drivetrains, it’s important to understand how earlier quattro systems worked.

Ordinarily, the differential—a set of gears driving the wheels at each axle—are fully open to help compensate for the difference in speed each wheel travels. Think of taking a corner, for instance: the inside wheel will rotate far less than the outside wheel. Locking the rear differential helps ensure power gets to both wheels equally, which is needed when driving on slick surfaces or traction-limited situations but also to maximize grip in any condition. The front does not have a locking differential because of the need to turn.

In the first major update of quattro in the late-1980s, a Torsen (short for torque-sensing) differential that automatically split power 50:50 from front to rear replaced the original manually operated center differential. A rear differential lock switch remained; some larger vehicles were available with a rear Torsen differential as well.

The Torsen center differential housed a pair of helical planetary gears. The gears were held in tight-fitting pockets inside the housing and splined together through spur gears at their ends. These spur gears did not allow the planetary gears to rotate in the same direction. However, when an axle would lose traction, the spur gears would help channel torque to the wheels with traction. This could allow up to two-thirds of the vehicle’s torque to be sent to either the front or rear axle.

Haldex: not averse to being transverse

Medium- and large-sized Audi vehicles have a longitudinal engine, with their transmissions and differentials sitting behind the engine. Starting in 2000 in the U.S., smaller vehicles like the Audi TT came with their engines sitting sideways—often called transverse. As a result, their transmissions took up space practically underneath the engine, necessitating a different sort of quattro all-wheel-drive system.

On a slippery driving surface, one or more wheels may have reduced traction. As a result, the Haldex coupling senses a difference in speed between the input and output shafts and takes action. Inside the unit, a roller bearing begins to rotate around a lifting plate with an undulating surface. This results in a lifting motion of a piston, which builds up hydraulic pressure. This pressure is applied to the Haldex clutch that connects the front and rear axles, making all-wheel drive possible. Sensors reading engine speed, accelerator pedal position and engine torque also participate in the activation of the rear differential. In addition, Electronic Differential Lock (EDL) utilizes the ABS system to control loss of traction at each individual wheel.

Audi offers five unique quattro technologies, all based on the same fundamental understanding of how quickly an all-wheel-drive system needs to respond—and with how much power to each wheel—for maximum grip and performance. The systems are as follows:

Fundamentally, quattro all-wheel drive for Audi medium and large cars works similarly to previous systems with three differentials. Now, it is mechanically as well as electronically activated, and it distributes torque to wheels based on steering angle sensors, traction and stability control, yaw sensors (measuring how weight shifts left or right around its center of gravity) and wheel sensors.

Default power distribution is 40:60 front to rear, with up to 70% of power to the front wheels or up to 85% of a vehicle’s power to the rear. Additionally, electronic wheel-selective torque control can assist traction across each axle through individual wheel braking. Torque control is provided by an intelligent software function of the stability control.

In S and RS models, the rear Sport differential has the ability to overdrive the inside or outside wheel, or even send almost all power from one rear wheel to the other, in hard cornering, creating more neutral handling. This is known as torque vectoring.

The quattro all-wheel drive with ultra technology that is currently offered in A4 allroad, Audi Q5 and Q5 TFSI e plug-in hybrid models takes advantage of a comprehensive array of sensors and constantly analyzes the vehicle’s dynamics, road condition and driver behavior. During standard operation at low loads without the potential of wheel slip, the quattro all-wheel drive with ultra technology takes advantage of the benefits of front-wheel drive—reduced friction and improved fuel-efficiency compared to full time all-wheel drive systems.

The system analyzes data every 10 milliseconds and is designed to operate proactively, predictively or reactively based on how the vehicle is being driven. All-wheel-drive clutch plates at the back of the transmission and the front of the rear differential can be fully released from the propshaft and rear differential, eliminating the mechanical drag of an all-wheel-drive car. Expected in the U.S. in the fall, the 2021 Audi A7 TFSI e plug-in hybrid will also feature quattro all-wheel drive with ultra.

Similar in philosophy to the Haldex system used in the original Audi TT, quattro all-wheel drive for transverse layouts can be found in the Audi Q3, A3 and TT models. Mounted on the rear axle for better weight distribution, an electronically controlled multi-plate clutch package of metal friction rings mounted in pairs one behind the other rotates—one with the propshaft and another leading to the rear differential.

The clutches are closed in traction-limited or dynamic driving situations. Otherwise, the clutches or are open, leaving the vehicle operating essentially as a front-wheel-drive vehicle in lighter situations. The quattro all-wheel drive is immediately reactivated when the driving situation changes. The quattro all-wheel-drive system works closely together with wheel-selective torque control, a software function of the stability control that uses light, defined braking to distribute the drive torque for confident handling at the limit.

For the R8 supercar quattro system, the seven-speed S tronic dual-clutch transmission with integrated rear-axle differential and locking center differential is mounted behind the engine and sends the power to the front axle via a propshaft. An electrohydraulic multi-plate clutch integrated in the front differential relays torque to the front wheels within just a few milliseconds when they sense a need for greater traction.

Switching from a simpler viscous coupling to an electro-hydraulic multi-clutch pack in the front from the first- to the second-generation R8, the car is able to transfer 100% of its torque to the front wheels, whereas the previous version could transfer just 30% of its power to the front wheels in the event of losing traction. Both axles are also capable of torque vectoring.

Lastly, e-tron quattro all-wheel drive will become a pillar of the brand as more electric vehicles enter the Audi lineup. With two motors—and a one-speed transmission for each—the quattro system is designed for rear-biased performance and is able to react to changing traction conditions and driver inputs quicker than its internal combustion counterparts. Energy recuperation from the electric motors to the battery is also primarily done by the rear motor.

Power is distributed to the front and rear axle as a function of a multitude of parameters. During spirited driving, a version of the e-tron with two electric motors at the back under development enables electric torque vectoring similar to the function of the sport differential. However, with no rear differential for each of the rear wheels, the two independent motors are able to more precisely divide torque for maximum performance. In both versions with one or two motors on the rear axle, wheel-selective torque control functions much the same way as it does in other quattro all-wheel-drive vehicles, acting as part of stability control to provide balance to the driving experience.

As a pioneer of all-wheel drive, Audi has been refining quattro for 40 years, mastering drivetrain technologies to provide drivers with the ultimate balance of performance, driving enjoyment and efficiency in a variety of road conditions.

Share
Previous: 3 Reasons To Call A Tow Truck
Next: How to Love The Car You Drive