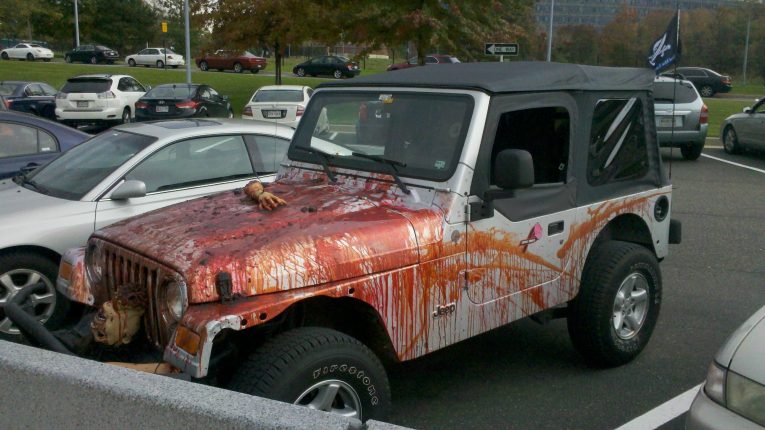 It’s nearly Halloween, which means everything in the house gets covered in glitter and wash-off paint. You’ve got to dress up, so everybody in the building gets a makeover too. Nobody or nothing can move for fear of being smothered, apart from the car. For some reason, the Camry gets a day off on the 31st of October.

It might seem like too much hassle, yet a car companion will pimp out your costume. Imagine being Batman with the Batmobile by his side. Or, it can be pretty casual and basic.

Just choose from any of the following decoration tips.

No, you’re going to the ball as Spiderman or girl. The webbing is for the chassis of the car which should be covered in the thick silver lining. From the hood to the trunk, make sure you spray it on good. A word of warning: don’t block your view from the driver’s seat. No one wants to blame a car accident on of their Halloween costume. To top it off, place a few giant spiders on the roof and around the windows. It’s basic yet effective, especially on black cars. Any decent fancy dress store should have ready-to-buy spiderwebbing in a bottle.

The kids are their favorite witches and wizards – Harry, Ron and Hermione – and they have booms to boot. What they don’t have is the flying Ford Anglia, or any wheels to be honest. They’re ride-less. Don’t bother investing in a clapped out Anglia just for Halloween because that’s dedication going too far. Instead, renovate the interior of your current vehicle. All it takes is a few choice banners, such as the Gryffindor and Slytherin crests. Put the Sorting Hat next to it and you’ve got a pimped out Harry Potter mobile the kids will love. Plus, it’s easy to clean the morning after.

For those with trucks, there is a simple and elegant solution to Halloween: fill up the cab. It doesn’t take much yet it looks the part when the car rolls down the neighborhood on All Hallows’ Eve. Firstly, get your generic Halloween accessories such as skulls and crossbones and giant spiders and place them in the back. Then, fill it up with leaves – the browner the better. Stick a haunted tree in there with a few webs and you’ll have the ultimate Halloween truck. Just tip everything out in the morning and the car will be as good as new.

Who you gonna call? Not the Ghostbusters because they’re not around any longer. So, there’s only one thing for it: take up the mantle of chief buster. No one else is going to stop those pesky spirits from ruining Halloween. The key is the car because estates work better than the new models on the market. Then, take a piece of cardboard and color it red and add the words “Ghost Containment Unit.” Dressed in a boiler suit, you’ll look the belle of the ball.

What’s the spookiest modification you can make to your car this Halloween?

Share
Previous: Bagging a Used Car at a Bargain Price
Next: Keep On Truckin’! Is A Truck Better Than A Car?