Once again, Halloween is around and while you may not be feeling the spooky spirit just yet, looking back at some of the creepiest movie star motors from back in the day will surely nudge you in the right direction as seen on hellhorror.com and similar movie sites especially as we get closer to the day. Each classic horror has its own eye-catching motor. Our favourite horror movies have brought some of the most iconic vehicles in the motor history, and here they are, basking in their own glory.

Jaguar XJ12 from Shaun of the Dead

Those who haven’t already sat and watched Shaun of the Dead with your brothers and sisters, cousins, friends or whoever, you should make this part of your Halloween movie ‘to watch’ collection for 2018. At some point during Shaun of the Dead, you get to witness the Jaguar XJ12 in its finest, knowing just how looked after these cars should be – even if the world is about to end!

Oldsmobile Delta 88 from The Evil Dead

As cliché as it sounds, five friends who travel to a cabin in the woods take to the road in the Oldsmobile Delta 88 and upon arrival, summon the presence of flesh-possessing demons and more. The reason the movie director, Sam Raimi used the Oldsmobile Delta 88 is simply because that was his own car throughout his teenage days; the car itself has made several appearances in four Evil Dead movies and remains as iconic as back then. 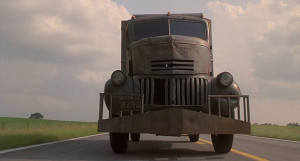 Not that many would even want to drive Chevy’s Cab Over Engine, but if they did and they watched Jeepers Creepers beforehand, their opinion would undoubtedly change. Old, battered and holding its share of dark secrets, the Chevrolet Cab Over Engine is the pride and joy of one of TV’s freakiest monsters; Jeepers Creepers, the part-human, part-bird and whatever else it’s made of creature. Nonetheless, when you think of Halloween, the first motor that comes to mind is this!

Plotting his revenge plan for the serial killer who murdered his wife, James Caviezel takes to the road in his 1968 Barracuda in the 2004 Highwaymen killer movie. Ironically, when the two men meet, the vengeful husband is sent to prison and the murderer? He visits the hospital in the meantime. But the fight doesn’t end there, and once the pair escape from their diversions, they meet once more for a nail-biting final scene. Without the need to say, the Barracuda is known as the movie’s iconic hero car.

Share
Previous: Improving Our Car (And Our Driving Abilities): Keeping Our Car Economical
Next: Prepare Your Vehicle: The War Against Winter Is Coming