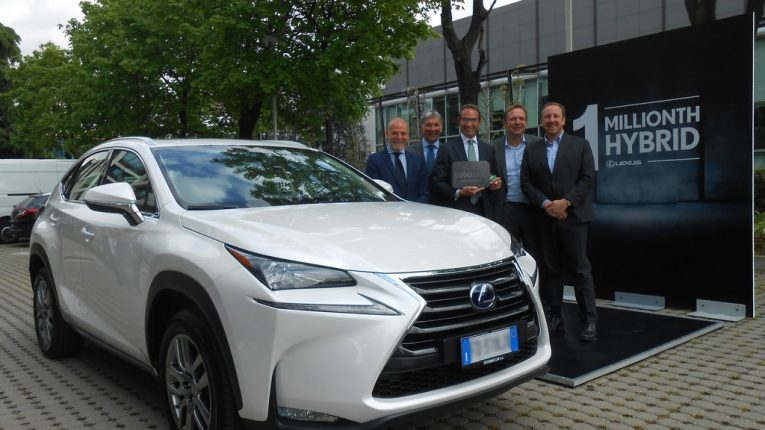 Lexus International announced it has sold over 1 million hybrid vehicles since the world’s first luxury hybrid vehicle, the RX 400h, went on sale in April 2005.

To commemorate this milestone, a new NX 300h was delivered to a Lexus customer in Milan, Italy, by Alain Uyttenhoven, head of Lexus Europe.

“The hybrid drive system continues to be our core vehicle technology to help reduce CO2 emissions, while providing a pleasurable driving experience. We have set ambitious environmental goals for 2050, and hybrid popularity worldwide is extremely important if we are to achieve those goals. Today, Lexus manufactures ten hybrid models, with more on the way. I’m pleased over 1 million customers worldwide have put their faith into our hybrid line-up,” said Tokuo Fukuichi, president of Lexus International.

“This is my first Lexus. I chose this brand because I really value it. When I saw the new Lexus NX 300h, I was immediately captured by its design, and of course the hybrid technology made me enthusiastic. I was surprised to hear that I was the buyer of the 1 millionth Lexus hybrid, and I am honoured to celebrate this important milestone with Lexus!” said Aldo Pirronello, new NX 300h owner.

“No other Luxury carmaker can equal Lexus’ depth and breadth of efficient and refined drive full hybrids. With our portfolio of advanced technology, like full hybrids and Lexus Safety System +, it’s no surprise we’ve reached this milestone and dominate the full hybrid luxury market. I’m delighted to deliver this new NX 300h to Aldo Pirronello on behalf of Lexus International,” said Alain Uyttenhoven.