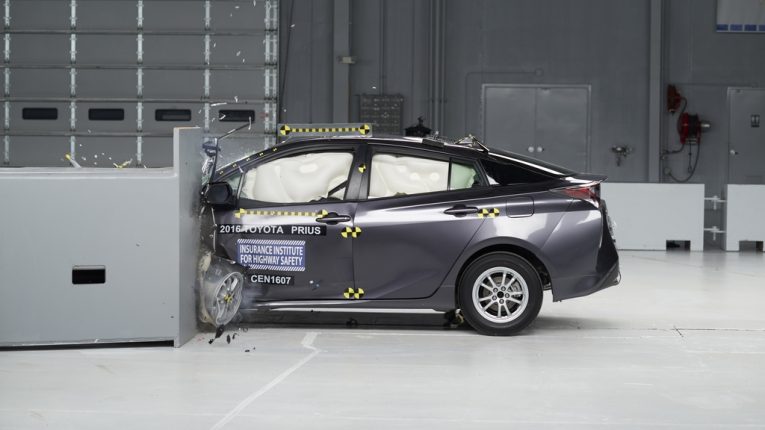 The 2016 Toyota Prius qualifies for the top award from the Insurance Institute for Highway Safety after acing the challenging small overlap front test. In addition, the optional front crash prevention system on the small hybrid car has improved to earn a superior rating.

To qualify for TOP SAFETY PICK+, vehicles must earn good ratings in the small overlap front, moderate overlap front, side, roof strength and head restraint tests and must have an available front crash prevention system that earns an advanced or superior rating.

The previous generation of the Prius had good ratings in four of the five crashworthiness tests, but rated only acceptable for small overlap protection. The earlier model’s structure didn’t hold up well in the test.

In contrast, the 2016 Prius had maximum intrusion of just 2 inches at the upper door-hinge pillar and at the brake and parking brake pedals. The dummy’s movement was well-controlled, and measures taken from the dummy showed a low risk of injury in a crash of the same severity.

The optional front crash prevention system has improved over the advanced-rated system available on the previous model. The new Prius avoided collisions in both the 12 mph and 25 mph IIHS track tests. It also has a forward collision warning component that meets National Highway Traffic Safety Administration criteria.