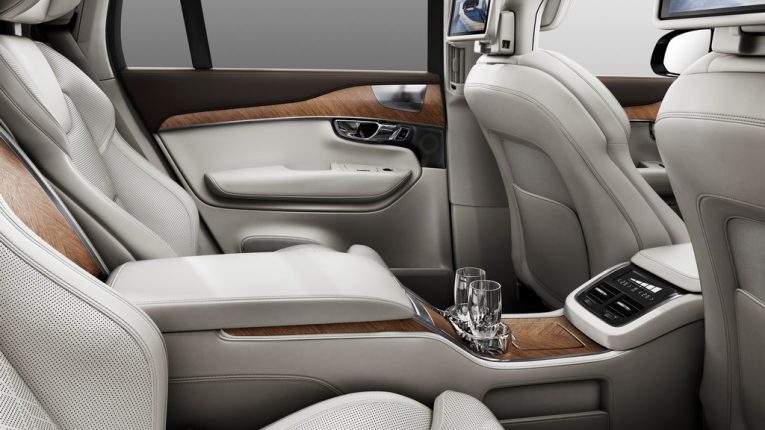 The Volvo XC90 Excellence, a four-seat ultra-luxurious variant of the award-winning XC90 SUV, made its debut as production begins in Gothenburg, Sweden. Limited numbers of the XC90 Excellence will be available in the United States this summer, with an MSRP of $104,900.

The XC90 Excellence breaks new ground for Volvo, delivering a level of luxury, craftsmanship and comfort not previously seen in the company’s offerings. The driver and front passenger seats are duplicated to form the vehicle’s second row, fundamentally changing the car’s configuration.

The presence of Nappa leather and open-pore wood, a signature of the XC90 Inscription, is expanded throughout the interior while a partition isolates the passenger space from the cargo area. This ensures an ultra-quiet environment to enjoy the 20-speaker, 1400-watt Bowers & Wilkins sound system.

The Volvo XC90 Excellence is uncompromising in luxury, safety and its environmental footprint. The vehicle is offered exclusively with Volvo’s 400 horsepower, T8 Twin-Engine Plug-in Hybrid Electric powertrain with an Orrefors crystal gear shifter. Of course, the XC90 Excellence meets the same stringent safety standards as the XC90 T8 Inscription, Momentum and R-Design.

“The Volvo XC90 Excellence is a fantastic expanded version of Volvo’s idea of luxury. It brings together fantastic materials, uncompromising safety and performance into an amazing package,” said Lex Kerssemakers, President and CEO of Volvo Car USA, “This car exposes Volvo to a new type of buyer.”

The XC90 Excellence also provides a platform for innovation. Possible configurations include a Child Seat Concept, where an infant carrier replaces the front passenger seat, and a Lounge Concept, where the front passenger seat is replaced with a footrest and LCD screen. This flexibility, and Volvo’s desire to create a car adaptable to changing owner needs, makes the XC90 Excellence a car with truly global appeal.