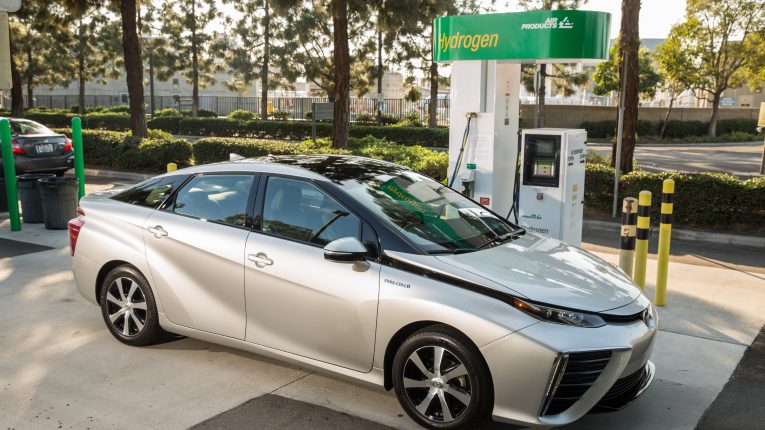 The all new Toyota Mirai has a range of up to 300 miles, takes about 5 minutes to refuel and emits only water vapor. It will go on sale in the US later this year.

We are calling on the new Congress to reinstate the tax incentives for hydrogen companies that build refueling stations and for consumers who would like to purchase fuel cell vehicles.

“Consumers and the investment community need a clear signal that government is not choosing winners or losers in the zero emission vehicle race.  These vehicles should be treated equally to allow the market to decide,” he said.

Patel cited Toyota’s recent decision to release nearly 5,700 global patents, royalty free, to competitors as means to help move from a hydrocarbon to a hydrogen- based society.

“Hopefully, by sharing our patents with other vehicle and parts manufacturers, components and systems can be refined and improved to increase performance, reduce cost and attract a much broader mainstream market of buyers.”

Toyota announced today that because of demand, it will increase global production capacity of the Mirai to more than 5,700 by the end of 2017.

While most refueling stations are currently located in California, Patel said the company is partnering with Air Liquide—one of the world’s most experienced hydrogen suppliers to develop and supply a phased network of 12 state-of-the-art hydrogen stations in 5 states: New York, New Jersey, Massachusetts, Connecticut and Rhode Island.

These states and locations have been strategically selected to support the greater New York and Boston areas as well as provide the backbone of a hydrogen highway for the Northeast corridor.

Patel said the company planned to talk with Maryland’s new governor and the new mayor of Washington about the hydrogen infrastructure in the mid-Atlantic region.