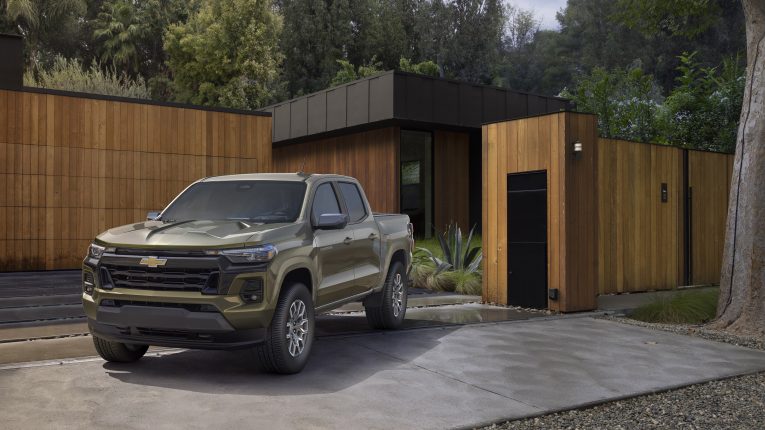 General Motors Corp introduced the new generation of the Chevy Colorado mid-size truck. It was developed with an eye on the home market, while the predecessor was created jointly with Isuzu and was first sold in Asia, Australia, and Latin America.

The previous Chevrolet Colorado debuted in 2011. It was a second generation for the global market: the American version differed greatly from the Asian one and featured unique designs and paced upgrades. Second-generation Colorado entered the home market only in 2014. The last restyling was in 2020. Both models are still in high demand in the aftermarket, check them as well as other Chevrolet trucks available for sale in the used car dealerships. Now a new third generation of Colorado is presented, focused mainly on North America since the model is already gone from most markets.

The Colorado in the new body remains recognizable, although it has narrower headlights and slightly more angular wheel arches. At the same time, the company prepared five complete sets for the truck at once, which differ both externally and technically. Pickup truck mavens from Indy Auto Man, Indianapolis, share their impression of the novelty.

The manufacturer reduced the powertrain range: atmospheric gasoline engines (including V6) and a high-torque 2.8-liter Duramax turbo diesel have been retired. The third-generation Colorados will receive a 2.7-liter petrol turbo-four. Each version will be featured by different output:

The all-wheel drive is not indicated in the official press release, but judging by the control washer on the central panel, the power to the front axle is automatically taken by the clutch.

Like its predecessor, the new Chevrolet Colorado 2023 is based on a frame structure with a front double wishbone suspension and a solid rear axle on leaf springs. However, the chassis is new and, according to the developers, more durable.

The interior of the renewed Colorado is made in the spirit of the Chevrolet brand: on the front panel, to the right of the virtual 8-inch instrument panel, there is an 11.3-inch touch-screen multimedia screen with spectacular animation of various driving modes: Normal, Tow/Hau for towing, Off-Road, Terrain for rocky surface, and Baja – the sport off-road version. The screen can also show up to 10 views from external cameras, including those under the bottom.

In the tailgate of the body there is a convenient storage niche(45×4 in.) with drainage water holes. There is a measurement scale molded on the inner surface and cup holders. The side of the tailgate can withstand loads up to 500 lbs and be used as a dining or work table.

The equipment of the new Colorado is highly dependent on the version. At the start of sales, customers will get an opportunity to choose from five of them – WT, LT, Z71, Trail Boss, and ZR2.

● The WT version is recognizable by its black bumpers, minimal exterior decor, and steel wheels. In the first place, it is intended for corporate buyers.

● The LT option is focused on private customers. It has painted bumpers, and the wheels are already light-alloy – 17 in.

● The Z71 trim (and all subsequent ones) are already off-road oriented. It draws attention with black wheel archextensions and 18-inch wheels. It has LED headlights instead of basic halogens and increased ground clearance.

● The flagship of the line is the ZR2 version. Its main features are the Multimatic DSSV shock absorbers, suspension with reinforced levers, an extended track, sill, toothy tires, underbody protection, and cut bumpers. There is also an optional Desert Boss package available. It includes 17-inch wheels with beadlocks, a tubular frame for the body with an LED lighting system, a camera along the bottom, and a unique decor.

The new Colorado pickup will be available exclusively with a two-row Crew Cab. There won’t be a diversity in the size of the loading platform either – buyers will be offered only a Short Box version. So those who need other options can always consider a wide range of used Chevy trucks for sale in Indianapolis.

Serial production of third-gen Colorado will be launched at a plant in Missouri, where Chevrolet is making the model in the old body. New trucks will come off the assembly line only at the beginning of 2023 and appear on sale in the spring of the same year. How much the pickup will cost is still unknown but probably more expensive than its predecessor.

Share
Previous: How to Manage Your Gas Station with Rising Gas Prices
Next: Is Fresno County Safe for Bicyclists?