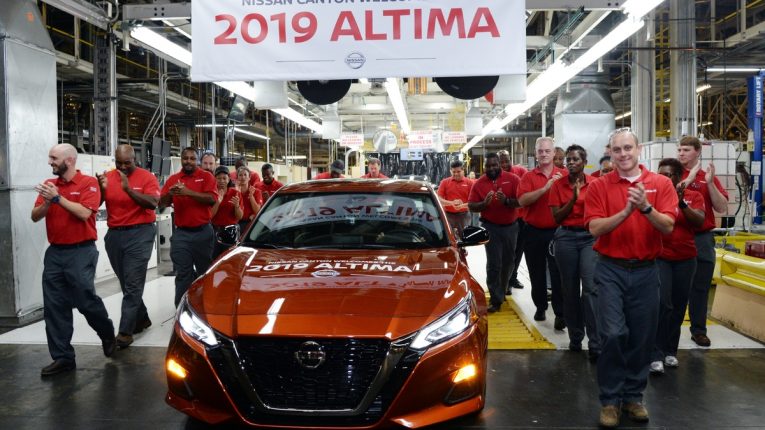 Nissan is celebrating the start of production of the new 2019 Nissan Altima at its Canton Vehicle Assembly Plant.

“This is a great day for Nissan and the Canton plant,” said Philip Calhoun, vice president, Manufacturing, Nissan Canton Vehicle Assembly Plant. “As we celebrate 15 years of manufacturing in Mississippi, more than four million vehicles produced, and now, the all-new Altima, we have much to be excited about.”

Building on 25 years of success and more than 5.6 million sales to date, the all-new Altima is bringing excitement back to the mid-size sedan segment with expressive styling, an uplifting interior and two new engines. Altima is also the first Nissan sedan in the U.S. available with Intelligent All-Wheel Drive and advanced Nissan Intelligent Mobility features, including ProPILOT Assist.

“The thriving automotive industry in Mississippi started with Nissan over 15 years ago, and we celebrate with the entire Nissan team on today’s launch,” said Mississippi Gov. Phil Bryant. “The all-new Altima embodies the success of Mississippi in leading the world in bringing cutting-edge technologies to market through advanced manufacturing.”

The sixth-generation Altima is being built at Nissan Canton and at Nissan’s Smyrna (Tennessee) Vehicle Assembly Plant, where production began in August 2018. The all-new model will arrive in dealer showrooms in the U.S. this fall.

Share
Previous: What To Expect In A Car Accident On The Road
Next: 2019 Nissan Titan Features Fender Audio System by Panasonic