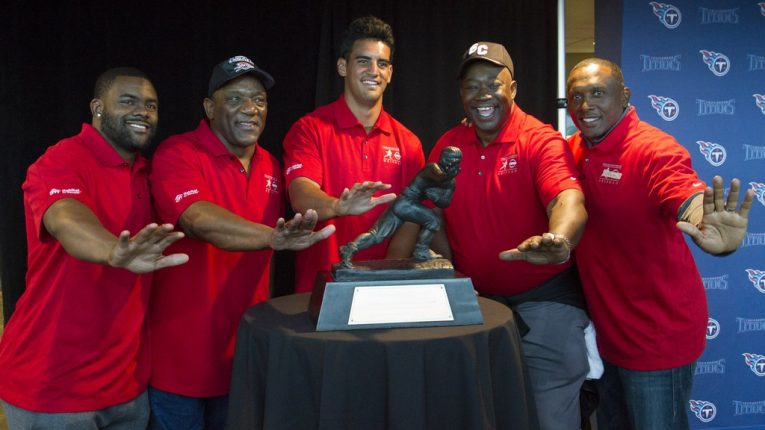 For the fourth consecutive year, Nissan is partnering with the Heisman Trophy Trust to begin construction of a Habitat for Humanity home in a community where the automaker has a business presence. This year the home is located north of Nashville.

Before starting the Habitat home, upon their arrival in Nashville today, the Heisman Trophy winners helped to lead a youth football clinic at Nissan Stadium. The football clinic engaged 200 student members of the Boys & Girls Clubs of Middle Tennessee who ran drills and practiced basic football stances.

“We were certainly thrilled to host this event with our partners at Nissan. It was simply awesome to host more than 200 area kids from the Boy & Girls Clubs at Nissan Stadium and interact Heisman legends,” said Ralph Ockenfels, vice president, Marketing and Broadcasting & Digital Rights, Tennessee Titans.

Construction of a new home will kick off on April 22 with the Heisman Trophy winners and new Habitat homeowners, Mohammed Berema and his wife, Khadija Aldom. Over the next four weeks, groups of Nissan volunteers will complete the house with the homeowners and other Habitat volunteers.

Starting in 2013, this unique collaboration grew out of existing relationships among Nissan and its longtime partners Habitat for Humanity and the Heisman Trophy Trust.

“Nissan has been active for many years with Habitat for Humanity in communities where we live and work, and our strong partnership with the Heisman Trust and its mission of building strong communities and service to America’s youth continues to be an excellent fit,” said Jeremy Tucker, vice president, Marketing Communication & Media, Nissan. “We’re grateful to these athletes for joining in this unique partnership to conduct a football clinic for area kids, and to help Berema and Aldom and their family improve their living conditions through home ownership.”

“While every Habitat home is a blessing, the special relationship with Nissan and the Heisman Trust makes this home build extra special,” said Danny Herron, CEO, Habitat for Humanity of Greater Nashville. “We take pride in empowering families in realizing the dream of owning their first home, and having the Heisman winners working alongside the many generous volunteers to make this family’s dream come true is an experience we will always remember.”

Nissan invites all its stakeholders to support Habitat for Humanity. NissanUSA.com visitors can click through to Habitat’s website to make a donation or find volunteer opportunities across the United States Habitat was named “Brand of the Year” in the social services nonprofit category based on the 2016 Harris Poll EquiTrend® Equity Score. This is the second consecutive year the global nonprofit has been recognized for its strength in brand equity. In addition, Habitat for Humanity earned the distinction of being named the “Most Loved” and “Most Trusted” brand within its category this year.

Nissan’s national partnership with Habitat dates back to 2005, following hurricanes Katrina and Rita. Since 2006, Nissan has contributed more than $13 million to Habitat for Humanity. Nissan employees have helped to build more than 70 homes across the United States, and the company has donated 130 vehicles to support Habitat’s mission.

Share
Previous: Toyota Pioneers Use of Biosynthetic Rubber in Engine and Drive System Hoses
Next: Reviewed: 2016 Toyota Corolla LE Plus