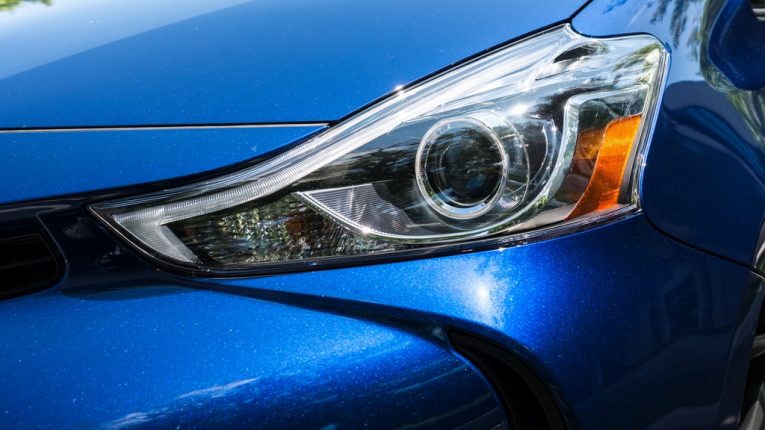 The Toyota Prius v is the only midsize car out of 31 evaluated to earn a good rating in the Insurance Institute for Highway Safety’s first-ever headlight ratings.

The best available headlights on 11 cars earn an acceptable rating, while nine only reach a marginal rating. Ten of the vehicles can’t be purchased with anything other than poor-rated headlights.

A vehicle’s price tag is no guarantee of decent headlights. Many of the poor-rated headlights belong to luxury vehicles.

“If you’re having trouble seeing behind the wheel at night, it could very well be your headlights and not your eyes that are to blame,” says David Zuby, IIHS executive vice president and chief research officer.

The ability to see the road ahead, along with any pedestrians, bicyclists or obstacles, is an obvious essential for drivers. However, government standards for headlights, based on laboratory tests, allow huge variation in the amount of illumination that headlights provide in actual on-road driving. With about half of traffic deaths occurring either in the dark or in dawn or dusk conditions, improved headlights have the potential to bring about substantial reductions in fatalities.

Recent advances in headlight technology make it a good time to focus on the issue. In many vehicles, high-intensity discharge (HID) or LED lamps have replaced halogen ones. Curve-adaptive headlights, which swivel according to steering input, are also becoming more widespread.

Research has shown advantages for the new headlight types, but they don’t guarantee good performance. The Institute’s headlight rating system doesn’t favor one lighting technology over the other, but simply rewards systems that produce ample illumination without excessive glare for drivers of oncoming vehicles.

How headlights are evaluated

Headlights are evaluated on the track after dark at the IIHS Vehicle Research Center. A special device measures the light from both low beams and high beams as the vehicle is driven on five different approaches: traveling straight, a sharp left curve, a sharp right curve, a gradual left curve and a gradual right curve.

Glare for oncoming vehicles also is measured from low beams in each scenario to make sure it isn’t excessive.

Headlights are tested as received from the dealer. Although the vertical aim of headlights can be adjusted on most vehicles, IIHS doesn’t change headlight aim because few vehicle owners ever do and some manufacturers advise consumers not to.

After a vehicle is tested on the track, IIHS engineers compare its visibility and glare measurements to those of a hypothetical ideal headlight system and use a scheme of demerits to determine the rating. Results for low beams are weighted more heavily than high beams because they are used more often. The readings on the straightaway are weighted more heavily than those on the curves because more crashes occur on straight sections of road.

Vehicles equipped with high-beam assist, which automatically switches between high beams and low beams depending on the presence of other vehicles, may earn back some points taken off for less-than-ideal low beam visibility. This credit is given only for approaches on which the glare threshold isn’t exceeded and on which the high beams provide additional visibility compared with the low beams.

A vehicle with excessive glare on any of the approaches can’t earn a rating above marginal.

One good rating out of 82

Vehicles can be equipped with different headlights, so there are a total of 82 headlight ratings for 2016 models even though there are only 31 vehicles. The Institute is rating every possible headlight combination as it becomes available from dealers.

“The Prius v’s LED low beams should give a driver traveling straight at 70 mph enough time to identify an obstacle on the right side of the road, where the light is best, and brake to a stop,” says Matthew Brumbelow, an IIHS senior research engineer. “In contrast, someone with the halogen lights would need to drive 20 mph slower in order to avoid a crash.”

Among the 44 headlight systems earning a poor rating, the halogen lights on the BMW 3 series are the worst. A driver with those headlights would have to be going 35 mph or slower to stop in time for an obstacle in the travel lane. A better choice for the same car is an LED curve-adaptive system with high-beam assist, a combination that rates marginal.

In the case of the Optima, a big problem is glare. Its curve-adaptive system provides better visibility than its non-adaptive lights, but produces excessive glare for oncoming vehicles on all five low beam approaches.

One of the best headlight systems evaluated has none of the new technology. The basic halogen lights on the Honda Accord 4-door earn an acceptable rating, while an LED system with high-beam assist available on the Accord earns only a marginal.

For more ratings, visit the IIHS.