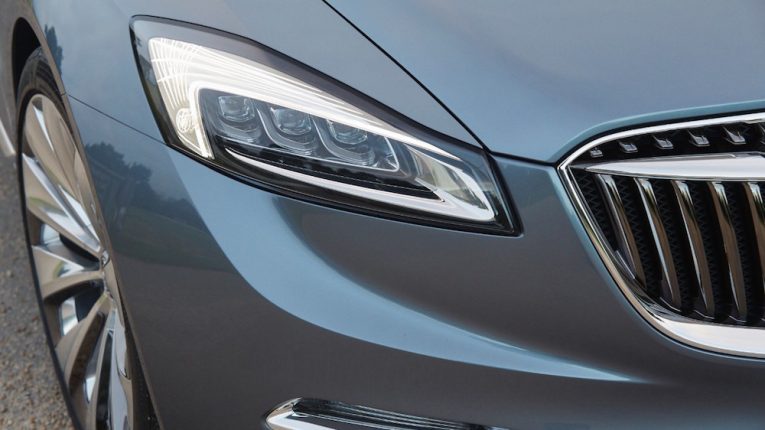 To the designers of the Buick Avenir concept, light-emitting diodes, or LEDs, are more than just an energy-efficient method of illuminating the road ahead – they are an advanced way to accentuate an already striking design as it rolls down the road.

“We worked hard to not only make Avenir distinctive from across the room, but draw you closer with its detail work,” said Michael Simcoe, vice president of design, GM International Operations, “and that certainly includes its dramatic lighting. The head and taillamps are the result of our lighting designers in North America working hand-in-hand with our exterior designers and fabrication craftsmen in our Australia Advanced Studio.

“Like the rest of the Avenir, they are a dramatic expression of modern Buick design.”

Distinctive headlamp and taillamp shapes have always been a part of Buick’s visual identity, but new technologies – especially the use LEDs, now allow designers to further hone the look of lighting elements and the light they emit.

“Technology will always be a major contributing factor to future Buick lighting designs as it allows for more flexibility with the aesthetics and performance of the light, but also how the light is integrated into the vehicle,” said Martin Davis, design manager for exterior lighting. “Thanks to LEDs, we are now at the point where designers can break free of many of the constrictions previously placed on lighting design.”

“Compared to conventional lighting sources, LEDs are smaller and more flexible in how they can be packaged into a headlamp or assembly,” Davis said. “We have dedicated teams of designers working closely with engineers to not only create smaller light clusters or place intricate patterns within lamps, but we can uniformly light complex shapes, thanks to diffuser screens like those used in commercial building signage.”

Like its interior, Avenir’s headlamps incorporate a mixture of subtle yet technical details that reveal themselves upon closer inspection. A triad of jewel-like LED assemblies provide most forward lighting, and they are shaped in a way that echoes the wave-like forms found within its cabin.

Avenir’s headlamps and taillamps also incorporate diffused light elements, which form “wings” that stretch across the top of the lamp assembly replicating the fender forms. Each wing subtly incorporates the signature Buick tri-shield logo, and continues the layered pattern found on the decorative trim and seating surfaces.

LEDs also allow designers to have more control over how light actually behaves within the lamp assemblies. For instance, the wing accents in Avenir’s lamps cleanly and uniformly illuminate when the lamps are switched on, providing a distinctive visual accent in both daylight and at night. Also, when the turn signals are activated on Avenir, an LED in the headlamps and taillamps illuminates sequentially, lending the impression of waves upon a shoreline.

“Signature lighting is often the first design element people notice on a vehicle, even if it happens to be hundreds of feet away,” said Davis. “A distinctive illuminated graphic is incredibly important – it is an opportunity to visually communicate the design aesthetic of the brand. The wing signature lighting is a Buick design hallmark that will help you identify a Buick product on the road.”