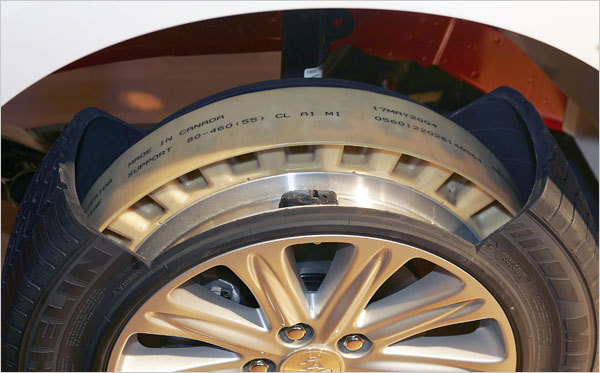 From the first inflatable rubber tyre to bizarre motorsport tyres and wheel alignments – there have truly been some great and terrible tyre inventions over the decades Here, we’ve rounded up just a few of them:

One of the best – The first pneumatic tyre

It’s no secret that many motorists today are full of hot air… But it’s thanks to a Scotsman called John Boyd Dunlop that our tyres these days are also full of air too. Dunlop was a humble veterinary surgeon who, in 1888, invented the inflatable tyre tube while trying to find a way to make his son’s bike rides more comfortable. There is a fair amount of controversy over his invention, however, as another Scotsman Robert William Thomson had actually already patented a similar pneumatic tyre a few years prior. But, since Dunlop quickly created the Dunlop Rubber Company, we won his legal battle over Thomson. Dunlop’s particular design ended up becoming more popular anyway, and formed the basis of inflatable tyres as we know them today.

One of the worst – The three-wheeled car

Ok, not a tyre invention per se, but we thought the rather tragic 1973 three-wheeled Reliant Robin car deserved a special mention, not only because of how ridiculous it looked, but because of how unsafe it was. The Top Gear boys even dedicated an episode to it 2007, proving how easy it was to roll on corners. We’ll stick to at least four tyres for our cars from now on, thanks…

One of the best – The self-inflating tyre

Goodyear have been testing a self-inflating tyre since late 2012, and while the tyre is not available on the market as yet, we still think they’re a pretty nifty invention (and so does the rest of the tech world, if this TIME article is anything to go by.) The way the tyre works is that as soon as the pressure gets too low, an internal pressure regulator opens to allow air to flow into a pumping tube as the wheel turns while driving. Once the air pressure hits an optimal level, the regulator closes – and this all happens without the driver even realising.

One of the worst – Oni camber tyres

One of the most bizarre trends to emerge out of Japan in the past few years is the now somewhat notorious “oni-camber” style of mounting car tyres. While it is guaranteed to turn a few heads, it’s a bad idea for countless reasons. This angle of camber can completely destroy rims and tyres if the car were to drive over the slightest bump in the road, and also causes seriously uneven tyre wear. You can even cause structural damage to the chassis of the car, completely ruining the vehicle. So if you want shock value from your car, paint it a loud colour or get some neon lights instead (if it’s legal where you live, of course).
What are some of the best and worst tyre and tyre-related inventions you’ve ever seen?