Home / DIY / A Glimpse Into The Near Future Of Automotive Wizardry 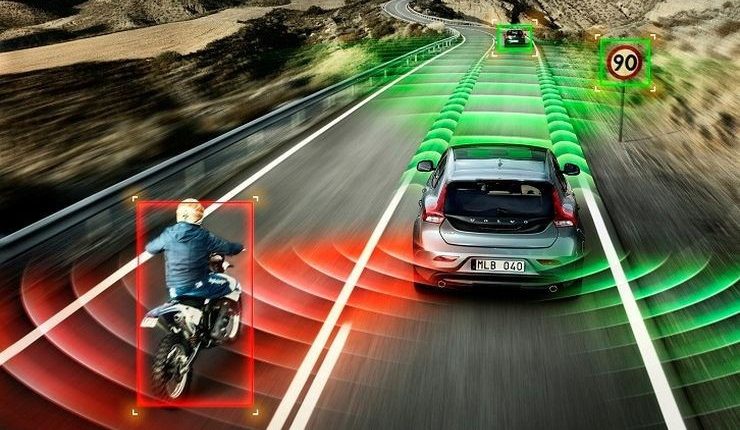 Step into any modern vehicle, and you’re suddenly awash with electronic gizmos, alarms and sensors. Unlike the cars of yesterday, modern vehicles do a lot to make driving easier. Parking assist, lane assist, automatic headlights, and automatic windshield wipers all improve quality of life.

But there’s no reason to think that technology will stop there. If history is any guide, we should expect the incremental improvements to continue, possibly forever. Although distant technologies, like fully autonomous cars, sound sexy and generate appealing headlines, most drivers are more interested in what technology they can expect from their next car purchase. With self-driving vehicles seemingly still years away, what technology is coming down the pike soon?

Phones can talk to each other when they’re in close proximity using Bluetooth, but cars, as yet, can’t. What’s more, the need for vehicles to be able to speak to each other is arguably greater than phones, since moving vehicles are a potential hazard to health. At present, drivers have to rely on their senses as well as the good judgement of other road users to warn of potential dangers ahead. But in the future, cars near the scene of an incident will be able to send information to drivers of other vehicles, warning them of the danger. These systems could also warn of other common road hazards like snow drifts, black ice and spilt freight.

Earlier this year, Corning, the company behind Gorilla Glass for mobile phones announced that it was going to be getting into the auto space. At present, car windscreens use fairly antiquated technologies that you can find out more about here. Flying road debris can easily chip standard glass, so there’s a real need for something much stronger. Gorilla Glass already revolutionised phones, making screens much harder to break or scratch, and now the Corning says that it has a viable product for cars too.

The first mass-market cars to feature the glass will be with us soon, and pre-production models are already on display. The company says that the glass shouldn’t be too much more expensive than existing glasses and that once used en masse, prices will fall considerably.

Remote shutdown technology is currently used by the police to prevent criminals from making off with stolen vehicles. But the technology could soon be in the hands of regular people, like you and I, if car manufacturers decide to make it a standard feature. Ostensibly, the idea behind this technology is to give drivers greater security and to prevent thieves from getting away with their vehicles. However, you can also imagine a situation where the state would abuse this technology, stopping people from going about their legitimate business. It could be a bit of a scary scenario, but at least it has the potential to put a stop to dangerous police chases.

Until we get fully autonomous vehicles, drivers need to be alert and in control of their bodies. Problems arise when drivers get sick while at the wheel. This new technology will be able to monitor driver health, rather like smartwatches do today, and warn of impending heart attacks or strokes. If the car does suspect that the driver has become seriously ill, it will automatically pull over to the side of the road at a safe location and activate the hazard warning lights. Car manufacturers also want the vehicle to call for an ambulance so that the driver and occupants don’t have to.

But there’s no reason to think that technology will stop there, as we now have the best robot vacuum cleaners.

Tesla made waves with the Model 3 for virtually eliminating the dashboard. The “affordable” car from the electric car company has no dials or buttons, just a single, central tablet-like display with all the controls. You can imagine, though, in the future, that Tesla would want to find a way to get rid of the tablet display entirely and instead provide timely information projected onto the windscreen in the driver’s-eye-view. It would solve an important issue that many have with the car – that the single display in the middle is awkward to see and use.

It turns out that augmented reality dashboards are in the development pipeline. So far the technology has been limited by the poor lighting of displayed images. But some experts think that the car industry might have nailed the technology, meaning that we could see new models with the technology by 2020. HUDs will give drivers a safer way to interact with their vehicles and may be able to provide instructions using voice commands or eye movements.

Airbags made a big difference to car safety after being introduced in the late 1980s. Since then, they’ve found their way into all sorts of nooks and crannies in our vehicles, with some car manufacturers mounting them to the outside of cars to protect pedestrians.

Now, though, automotive technology pioneer Mercedes is at it again, building a new kind of airbag which it hopes will stop accidents before they happen. The car manufacturer wants to develop a special type of airbag that will inflate in front of the front wheels, providing an extra braking surface for the vehicle, bringing it to a stop sooner. The company says that the added friction doubles the stopping power of its test rig, potentially halving the number of collisions. What’s more, braking forces remain within tolerable limits, meaning that passengers won’t experience the extreme G-forces that cause injury in most car accidents.

Would you put your family’s life in the hands of a computer algorithm? Well, that might not be your decision to make. Car manufacturers are beginning to think that machines can do a better job of driving than their human counterparts, and are looking at building systems that can override drivers when they make mistakes. To begin with, these systems will prevent drivers from crashing into cars in their blind spots when changing lanes and breaking to prevent rear-ending vehicles ahead, but in the future, cars could take over all kinds of tricky tasks, like navigating roundabouts or merging onto the highway.