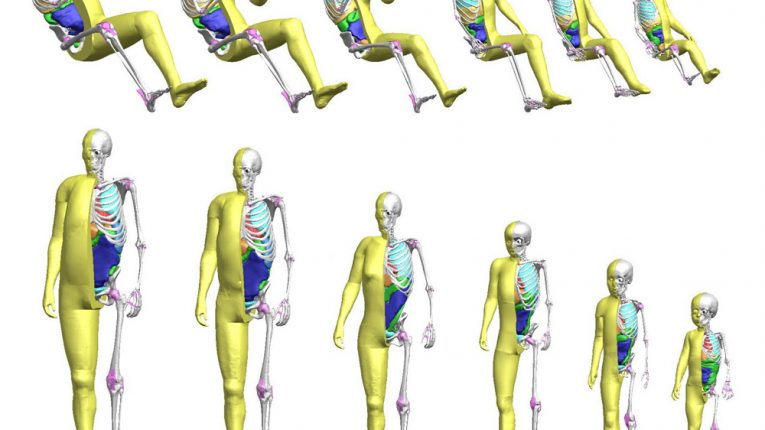 Toyota Motor Corporation has added three new models to represent children aged ten, six, and three to Version 4 of its Total Human Model for Safety (THUMS) virtual crash dummy software. THUMS allows injuries sustained by human bodies during vehicle crashes to be simulated on computer, and sales of the new models will begin from this autumn.

THUMS is able to forecast the extent of injuries sustained throughout the human body, and thus, is utilized in the technological development of passenger protection devices such as airbags, and to contribute to improved vehicle safety performance. THUMS is also increasingly being used in the field of motorsports. For example, it has been used by NASCAR (the U.S.-based National Association for Stock Car Auto Racing) to formulate regulations for seat shapes that are better able to reduce the likelihood of rib fractures sustained in drivers as a result of racing accidents.

The ten-year old (138cm tall), six-year old (118cm tall) and three-year old (94cm tall) additions to THUMS Version 4 represent the average physiques of children at each respective age. As with the large male (189cm tall), average-build adult male (179cm tall), and small female (153cm tall) models that are already being sold, the new models will come in two versions — a passenger version and a pedestrian version — for a total of six new additions to the THUMS line-up. This expanded line-up takes into consideration the influence of age and physique, and allows for a more thorough injury analysis.

Ever since THUMS Version 1 was launched in the year 2000, continued improvements and refinements have been made to the software. For Version 2, which was released in 2003, faces and bone structure were added to the models. Version 3, launched in 2008, added a brain simulation and in 2010, Version 4 was upgraded with detailed modeling of the brain and also the addition of internal organs and their placement and interaction within the body. In 2015, Version 5 added simulated musculature, allowing the models to assume the same bracing positions that a human might just before a crash.

The newly launched child-spec models were created as a result of collaborative research between Wayne State University, the University of Michigan, and the Collaborative Safety Research Center* located in the Toyota Technical Center in Ann Arbor, Michigan.

THUMS is available for purchase through the Tokyo-based JSOL Corporation and ESI Japan. THUMS is used for a wide variety of purposes by automobile manufacturers, parts manufacturers, and universities both in Japan and overseas. It contributes to research on safety technologies not just at Toyota, but also by organizations all over the world. The ultimate desire of a mobile society is to advance towards the goal of eliminating traffic fatalities and injuries. Going forward, Toyota will utilize THUMS to analyze the injuries sustained by both passengers and pedestrians during collisions with and between vehicles, and to further research and improve safety technologies of all kinds.