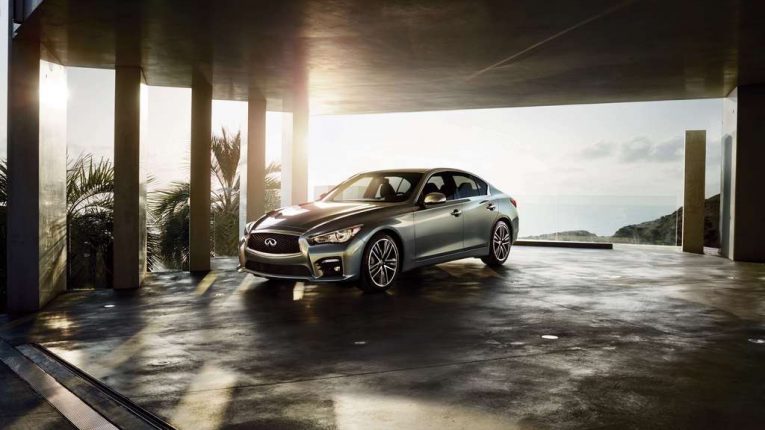 The Manufacturer’s Suggested Retail Prices* for the 2016 Infiniti Q50 2.0t and Q50 Hybrid Premium are:

“With the expanded engine lineup, the Q50 now covers more of the market. The Q50 2.0t, for example, has a new starting MSRP of $33,950 – a great entry point for a sports sedan with the style, technology and available safety features of the Q50,” said Randy Parker, vice president, Infiniti Americas. “At the same time, we continue to offer the Q50 Hybrid, the only vehicle in its class to offer more than 355 horsepower with at least 34 mph highway fuel economy.”

There are two option packages and one singular option for the 2.0t. The latter is leather seating surfaces. There’s a “Premium Plus” package that includes navigation, heated, power tilt/telescopic steering wheel, heated front seats, memory for the driver’s seat as well as auto-dimming outside mirrors and a 60/40 split fold-down rear seat.

At the heart of the Q50 2.0t is a 2.0-liter four-cylinder turbocharged unit – rated at 208 horsepower and 258 lb-ft of torque – that has been engineered to blend responsive performance with enhanced fuel efficiency. Fuel economy for the Q50 2.0t RWD is rated at 23 mpg city, 31 mpg highway and 26 mpg combined.

The new 2.0-liter engine features a lightweight aluminum block and cylinder head with chain-driven dual-overhead camshafts, die-cast aluminum cylinder crankcase and optimized crank assembly promote further weight savings, reduce friction and improve efficiency. For the first time, the Q50 will offer an idle stop-start system (ISS) in combination with the 2.0- liter turbocharged engine. The engine was developed in conjunction with Daimler and is assembled at Infiniti’s engine facility in Decherd, Tennessee.