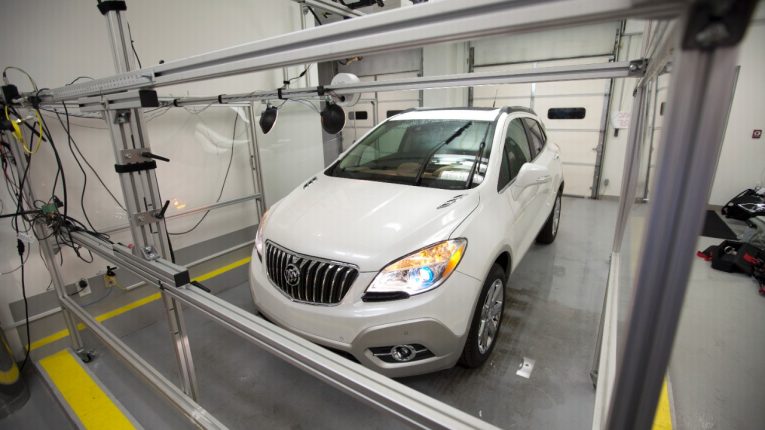 We’ve all experienced that startling moment when a passing vehicle splashes a flood of water onto your windshield and suddenly, your visibility is seriously compromised. Instinctively, you start to reach for the windshield wiper stalk, but the wipers have already begun to swoop. Relieved, you wonder, ‘How does my Buick know the windshield needs to be cleared?’

Vehicles like the Buick Encore small luxury crossover, can be equipped with the convenience of Rainsense wipers, which when activated, can automatically turn on the wipers when rain or water is detected on the windshield.

Using a rain sensor positioned behind the rearview mirror, a signal sent to the vehicle’s computer triggers the wipers when water is detected. But the technology goes beyond simply sticking a sensor on the windshield.

“There is a multi-stage process and testing procedure that we must to go through with the Encore, for example, in order to integrate the Rainsense function,” said Matt Piazza, General Motors’ global design engineer for rain sensor technology. “Each vehicle is unique and there are a lot of factors like windshield pitch, rain intensity, vehicle speed, and light conditions, that all have to be accounted for and validated.”

The rain sensor itself is about the size of a wristwatch. It is actually a light sensor that uses infrared light beams invisible to the human eye to detect water through light refraction when droplets contact the windshield.

Using advanced software, the sensor takes a reading once every 40 milliseconds, or in about the time it takes a humming bird to complete a flap of its wings. The sensor measures droplet size and frequency and sends a signal that determines how slow or fast the wipers move.

Unlike the traditional “intermittent” wiper settings, adjustment of the Encore’s wipers with Rainsense adjusts the sensitivity of the sensor rather than changing the time between wipes. The speed at which the Encore is traveling also factors in wipe frequency.

Rainsense also works in the dark. While the human eye perceives total darkness, a raindrop still refracts some amount of light. The programming of the rain sensor changes sensitivity in darkness to trigger more wipes, reducing windshield glare.

While in theory, it may seem like a simple system, assimilating Rainsense technology into each vehicle requires countless hours of testing where Piazza and team work alongside the sensor supplier, HELLA Electronics.

Integration into the Encore begins with a so-called “bench test,” where the sensor is tested to validate its relationship with the software. On the bench, Piazza and team confirm a signal receipt when triggered.

From there, it’s onto the complex task of mounting the sensor to the windshield. Placement is key and the best location is behind the rearview mirror, which is prime real estate for other electronics, including a camera for the Encore’s available Lane Departure Warning feature. This requires use of a smaller sensor mounted to the windshield at a 25–30 degree angle.

After mounting, the Encore enters HELLA’s rain chamber where a series of tests with artificial rain enable engineers to tweak the software. Light, droplet size, and droplet frequency are all factors in testing the system.

Real world testing comes next, where engineers validate the calibration and functionality by collecting data with a video overlay in natural rain leading to final adjustments.

“The advanced technology of Rainsense wipers are another added level of luxury and convenience for Buick Encore drivers,” Piazza said. “It constantly monitors the windshield, so that’s one less thing on the driver’s mind, allowing them to concentrate on the road ahead. Once you experience it, you won’t want a vehicle without it.”

Share
Previous: Ethanol in Fuel: Why You Should Care
Next: BENTLEY UNVEILS HYBRID CONCEPT